Phenylethylamine (PEA), which is called “the molecule of love” because we ourselves produce it in our body when we are happy or in love. PEA is a very powerful neuromodulator, able to modulate all the neurotransmitters (dopamine, acetylcholine, serotonin, etc.), and so to have a powerful effect on mood and attention, as well as on neuro-regeneration. But recent studies have shown that PEA is also a powerful immune-modulator, stimulating the release and migration of T, B and Natural killer cells. As if this weren’t enough, PEA has been shown to have :

– an effect on glycemic metabolism via the support of insuline production.

Finally, it ha shown to have a powerful effect on cerebral erythropoietin (EPO), which is the precursor of all neural stem cells, responsible for brain and nervous system regeneration.

AFA-phycocyanins (AFA-PC) are the most powerful antioxidant and anti-inflammatory molecules, proven to be about much more effective than renowned antioxidants such as quercetin and catechins. They have a specific structure which makes quite unique, and thus up to 200 times more powerful as antioxidants that Spirulina’s phycocyanins. They are also, as proven by both published and recent unpublished studies, the most powerful antiinflammatory natural molecules, and play also a role in cardiovascular health through their significant fibrinolithic activity. Finally, they strongly stimulate the release and migration of fibroblasts, the stem cells of the skin; and perform a similar function in relation to all somatic stem cells.

Mycosporine-like amino acids (MAAs) are antioxidants that, together with AFA-PCs, protect PEA and other neurotransmitters, such as dopamine, from being destroyed by specific enzymes called Monoamine oxidase (MAO-B) present in our bodies. To be undermined is the fact that both MAAs and AFA-PCs perform a physiological type of inhibition, without destroying the enzymes (as with pharmaceutical drugs) but only blocking thei action for a few hours.

Plus: Polyphenols – A high concentration of these antioxidant molecules

Chlorophyll – a whopping 4% of this molecule which mimics the human haemoglobin, and which has many anti-oxidant and antiinflammatory properties.

Xanthophylls – These are carotenoids that do are not transformed in retinol and vitamina A, but perform independent antioxidant functions. AFA-algae contains a wide spectrum of xanthophyll: lutein and zeaxantnin, which are considered imported for the eye’s health; licopene, the specific antioxidant of which tomatoes are very rich; astaxanthin, which is considered the most powerful antioxidant, together with cantaxanthin, which is highly present in AFA algae and in Klamax+: a dose of Klamax+ contains approximately 300 mg of cantaxanthin, which means that 3 doses would contain approximately 1 mg, which is the dose that is usually taken as an independent product to enhance tanning!

And…many more compounds that are still under research!!! 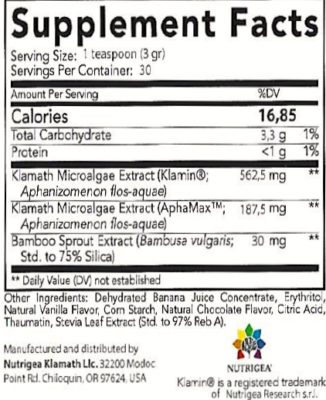